I hope you’re enjoying this series on the publishing people behind the scenes. So far we’ve looked at: what does an editor do?, what does a desk editor do? (there’s a difference!), how are book covers designed?, and how do you record an audio book? Last week I introduced you to Andy Hine, in what does a rights agent do? and this week it’s the turn of the translator: how are books translated into different languages? 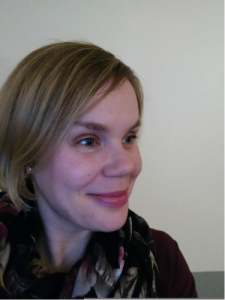 Päivi Pouttu-Delière
I have always loved reading and been interested in other cultures and languages. I studied English, French and Spanish at the University of Helsinki and wrote my master’s thesis on the translation of a multicultural and multilingual novel. During my studies, I did an internship in a publishing house and became even more convinced that I wanted to work with literature and translate novels. I am married to a Frenchman and we have three small children with whom we live in the country in an old house we bought and renovated some years ago.

How many languages do you speak, and do you work professionally in all of them?

I speak six languages (Finnish, English, French, Spanish, German and Swedish) and translate from English, French and Spanish into my mother tongue Finnish.

How important is it to understand the culture of the country whose books you are translating?

I think it is very important to understand the culture of the country in which the novel is situated in order to avoid so called culture bumps in translation. Even if I really want to preserve the culture-related elements of the source text in my translation I may feel the need to explain them to Finnish readers. For instance, if it says in the source text: “They were planning their summer holidays and decided to buy tickets to Glastonbury”, I believe an average Finnish reader might assume that Glastonbury is just a place name and that’s why in my translation I would add explanatory words “music festival” or “contemporary perfoming arts festival” after it.

How are books translated into different languages? What are the steps you take?

When I start a translation job, the first thing I do is to read the novel. When reading it, I try to pay attention to things I need to consider in my translation – certain things may become important later in the story and there can be passages I have to translate very carefully not to spill the beans. Another thing to do when starting a translation job is to try to understand what kind of personalities the characters of the novel are. I also like to spend some time studying the setting of the novel so that I can imagine what it looks like.
Schedule is also an important thing. Before starting the actual translation, I count how much time I have for it and then set weekly objectives (i.e. an x number of pages per week). I always leave some time for rereading the translation before the deadline.

What are the challenges you face when translating a novel? How do you handle things like idioms, jokes and political or topical references?

I really enjoy translating but it has its challenges. One of them is keeping up with rather tight schedules because there are always passages that take more time to translate than others.
Puns are difficult because often they just don’t work the same way in another language. Culture-related jokes and political references and the like are challenging especially when they appear in a dialogue. You can’t really explain culture-related elements inside the dialogue (i.e. in someone’s line) without making the speaker sound somewhat patronizing or odd. Idioms are easier because most of the time the Finnish equivalent works in the same context.

If you come across something you don’t understand – jargon, or a technical term peculiar to that language, perhaps – what do you do?

When translating I google things so much I do not even dare to think of how much carbon dioxide my searches produce. In general, it is relatively easy to find out the meaning of a specific word or expression but to check how the same thing is expressed in Finnish I may need to contact a specialist. For Clare’s books, I have contacted a policeman I know to make sure the police jargon I use in Finnish would sound credible also for those readers who are familiar with it.

Tell us something about your experience of translating Clare’s last book.

I like the fact that in Clare’s last novel there are two first person narrators as well as the third person narrator. Giving voice to the villains is not very common, and I really enjoy getting into their head and translating their passages. I must admit Clare’s last book (I See You) also made me think about my commuting routine and its potential dangers.

Note from the author: Päivi is the only one of my translators I’ve had the pleasure of meeting, but I’ve often had email contact with others. Sometimes they ask for help with police jargon, or for advice about a particularly tricky section they want to get right. Translating books is such a skill, and translators often aren’t given the credit they deserve.

Next up: marketing fiction