Every day until Christmas Eve I’ll be introducing you to an author whose debut novel came out this year. Today it’s Amer Anwar. 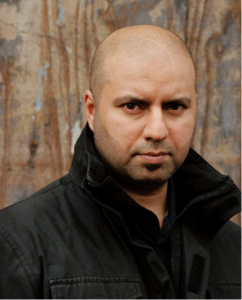 Amer Anwar grew up in West London. He holds an MA in Creative Writing from Birkbeck, University of London and is a winner of the Crime Writers’ Association Debut Dagger Award. Brothers in Blood  is his debut novel and the first in the Zaq and Jags series.

Brothers in Blood is a tough crime thriller set in west London’s Asian community. Zaq Khan is an ex-con, recently released from prison who is forced to look for a missing girl. But, what starts out as a simple search for missing person, soon becomes something a lot more complicated – and deadly.

I was inspired to write it by spending much of my youth in that part of west London and realizing it was a great setting for a crime novel. Also, there were no books representing characters like myself and the people I knew, so I wanted to do something to address that.

This book would be perfect for anyone who enjoys a fast paced crime thriller, with engaging characters and plenty of twists and turns along the way.

Nobody Walks by Mick Herron, Places in the Darkness by Chris Brookmyre and Widows by Lynda LaPlante.

I buy some good Stilton and a bottle of Port and, as I’m the only one who likes them, I get to have them all to myself, watching a late movie, when everyone else has gone to bed.