Every day until Christmas Eve I’ll be introducing you to an author whose debut novel came out this year. Today it’s Tade Thompson. 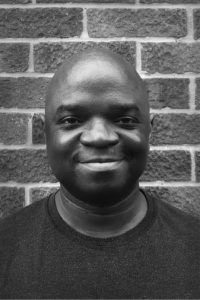 Tade Thompson is the author of Rosewater, a John W. Campbell Award finalist and winner of the 2017 NOMMO Award for Best Novel. He also writes short stories, notably ‘The Apologists’ which was nominated for a British Science Fiction Association Award. Born in London to Yoruba parents, he lives and works on the south coast of England where he battles an addiction to books.

My novel is called ROSEWATER. It’s a science fiction near-future novel of a slow alien invasion and the effects on my main character, Kaaro.

All the science fiction and fantasy that I have consumed in my short life, as well as the British Empire historical actions against their colonies.

People interested in sci-fi in general, but particularly Octavia Butler, Philip K Dick, William Gibson. It owes a debt to detective noir traditions too, so Raymond Chandler. It also works as a general novel about Africa, so I think anyone interested in Afrofuturism, African science fiction would enjoy it.

Kicking a punching bag and painting.

I watch Die Hard, which is the only true Christmas movie. 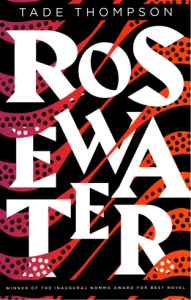